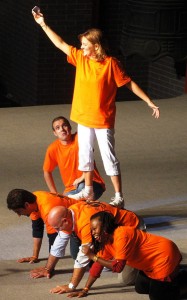 Scheherazade Consulting was founded by Caroline Watson in 2011. Born and brought up in Hong Kong of British parents, Caroline set up and ran China’s first and only social enterprise, Hua Dan, empowering migrant workers to run theatre workshops in their communities. Relocating back to Europe in early 2011, after nearly a decade of living and working in China, she recognised the need for a training company that told the real story of what was happening in China’s great rise to global power.

Having been selected as a Young Global Leader (YGL) of the World Economic Forum in early 2011, Caroline was invited to deliver a workshop on the themes of ‘global leadership’ and ‘moral dilemmas’, with a particular focus on China, at the YGL Forum in Dalian in September 2011. The workshop was delivered to an audience of over 200 Young Global Leaders from all over the world and provided a transformative opportunity for them to understand in depth many of the most pressing issues around international engagement with China.

Such was the success of the workshop, Caroline began to develop this model into a unique European and North American-based training company, seeking to inspire and equip current and future global leaders with the tools to manage in the new world order.

Besides her work with Scheherazade developing future global leaders at the top of the economic pyramid, Caroline is passionate about creating a model for theatre-based approaches to social change at the bottom of the pyramid, through the Scheherazade Foundation. A portion of profits from Scheherazade Consulting go towards our community projects around the world and we are always keen to work with our corporate partners, interested in engaging with us on this projects also.

Scheherazade Consulting brings to life for you stories that have an impact on the way in which you work and lead in China and other emerging markets.

This website uses cookies to help us learn about how our visitors use our site. This information does not personally identify you; it is completely anonymous. By using this site, you agree that we may store and access cookies on your device.Dismiss